This article is part of a series I am writing about a side project I made called o11y.guru. Who knows what this series or the project itself will become. The reason why I started it was to have my wonderland. A place where I was able to do my mistakes without any intermediary.

This series is about my journey there. I will keep the this Introduction common to all the articles part of this series and I will keep a Table of Content up to date. The best way to follow my journey here is to subscribe to the RSS feed or to follow me on @twitter.

what is this project?

I had this idea to create a mechanism to enable other people that uses twitter to follow a group of leaders in a particular space. I decided to start from the observability (#o11y) because it is the area where I am in at the moment.

o11y.guru is pretty simple, a list of faces and a button, they you press it and if you will authorize the twitter application you will get to follow them. 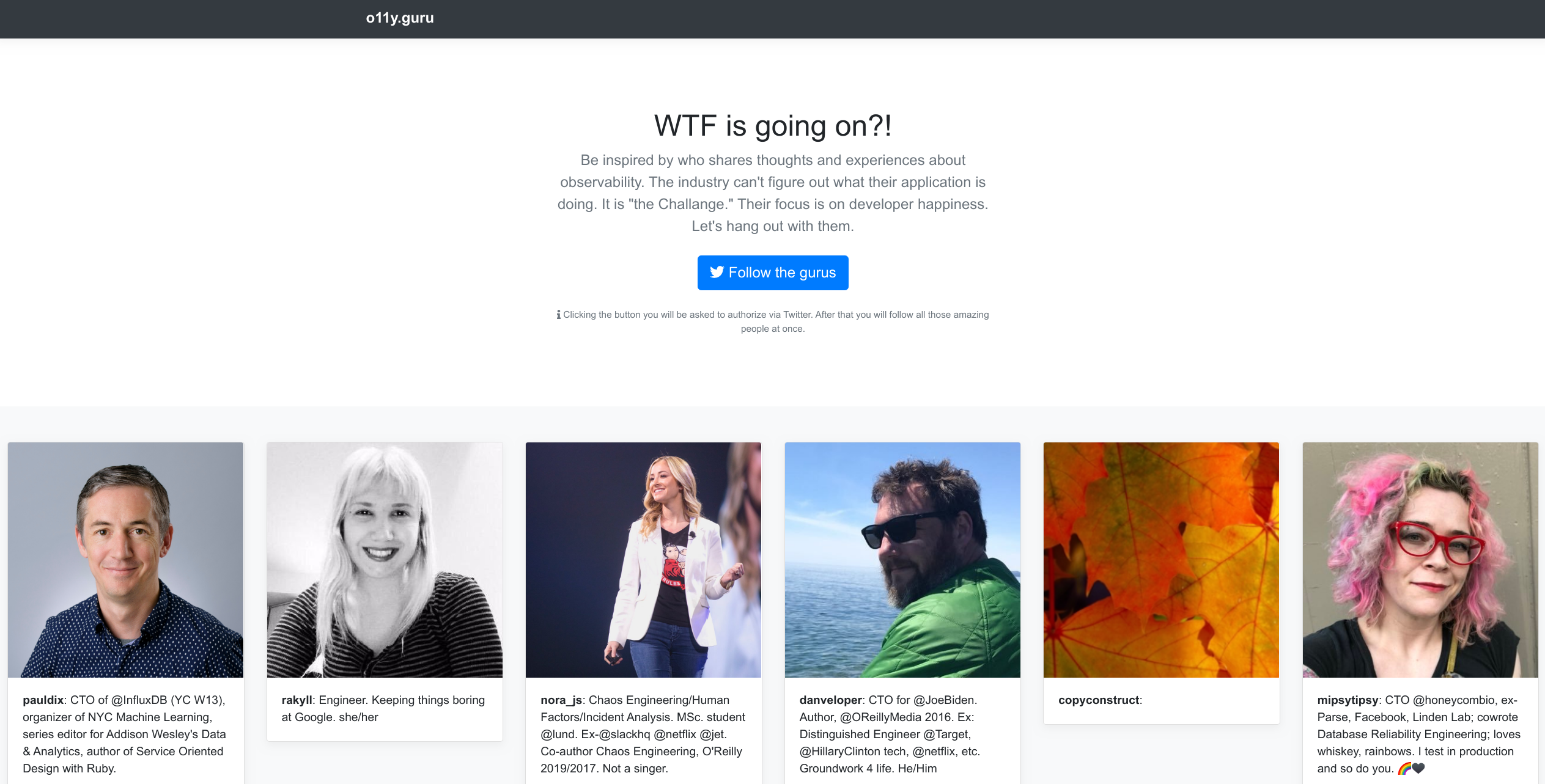 A few years ago when I was developing almost in PHP somebody from the community, I don’t remember who was, I am getting old, did a similar website and I thought it was a great idea.

Since then, the project was in the back, in my mind. I am a lazy person when it comes to writing code. I think there is enough useless code around, and I don’t want to incentive that practice. That’s why I tend to write as less code I can.

There are a bunch of reasons why I changed my mind, and I started to do it:

Better mood and I had to try Honeycomb.io, but I never had the right opportunity. I didn’t want to try it with a demo running on my laptop. I have a couple of new friends from CherryServer that supports my crazy ideas, and I was looking for a reason to glue a bunch of reliable infrastructure as code that I actually like. Even if it is usually a task I hate, mainly because there is no code involved.

As Docker Captain and CNCF Ambassador, I have the feeling than a project like that can be re-used.

I made the mistake that everyone does; I started to think about cool technologies and not the problem I was going to solve or the project I was going to write.

I made a react application, just the foldering, and I quickly realized that I do not know how to React, and I was wasting my time. But for this project, I got lucky enough to keep going. I started to think about the problem again, and I decided to make it as simple as possible. In practice almost everything gets generated by an html template and a piloted by a list of names in a txt file. Very easy!

You can see the shape of the project; it has a minimal amount of technologies involved: Go, HTML, Bootstrap 4, and a bit of Javascript. I started from the style directory. I use it for prototyping the HTML, CSS part. I am far away to be good with colors and CSS, and I am cool with that, we do not like each other. So I do all my tests there, and when I am ready, I port the style/index.html into index.tmpl. I started from a Bootstrap 4 layout already done as you can see. It is in their documentation. 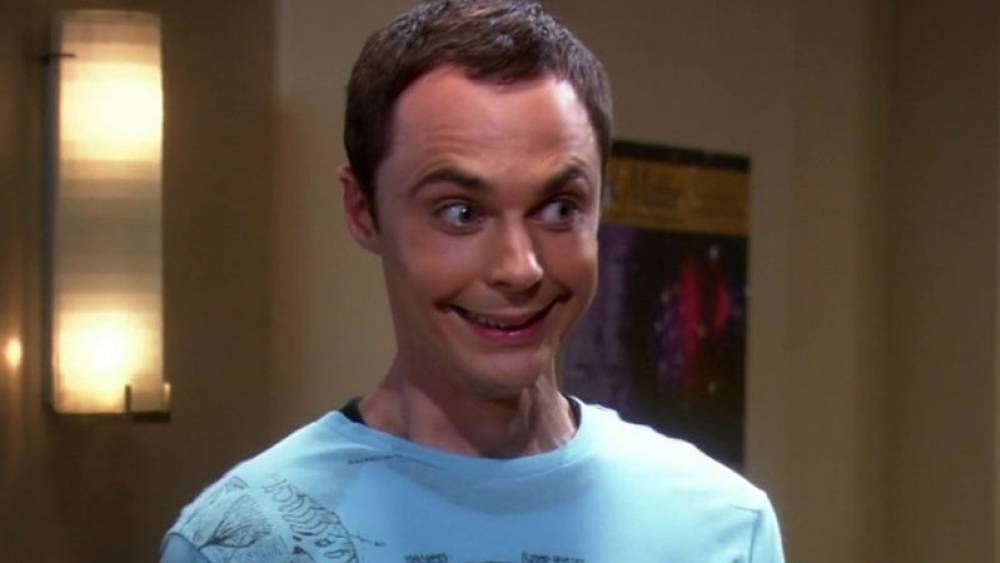 index.tmpl is the template I use to render the actual homepage. www is the target destination for all the static files and the generated index page. I use Make to copy files from style into www, and I wrote a CLI that generates the HTML and it populates it with Twitter informations. It is inside ./cmd/generate.

The cmd/generate reads that file and, it gets the information it needs from the Twitter API like user bio, avatar and it renders the ./index.tmpl into the actual index inside the www folder.

./cmd/www is an HTTP server written Go that serves the content of the www directory. Plus it uses:

I am sure you are wondering, “is he gonna open-source that!?”. I am. Not now. The project needs to refactoring and some code needs to get stronger around instrumentation and logging. As you see in the introduction, I am using this experience as a use case to write down a bunch of practices I like or that I would like to investigate. So stay tuned! It will be available very soon.

Some of lessons I learned comes from how I am, but hey, this is my blog, I can do whatever I like! It is refreshing to start a project, but it is way cooler to have something to show. So be careful when you start it, get it right so you won’t get tired.

Set clear goals, and see point 1, they need to be very easy to achieve, at least at the beginning.

Do not type on your terminal, but write bash scripts. I started to do this months ago at work. Bash scripts are way better than random commands in a terminal because you can move them around composing way more powerful workflows. You won’t lose them. That’s how I built my Makefile, just from the terminal history or from the shortcut I made along the way. Often a well-done dotenv file is enough to manage everything you need.

let’s get to some code

I told you about bash scripts and Makefile, I will write a post about automation for a small project, but this is part of my Makefile:

People can do the same with npm and, a hundred node packages, I like to keep things simple at this point to avoid unnecessary blockers that will get my tired. This is how I manage the style directory and how I build the www one.

With blockers I mean: googling around for things that should be easy.

The generate command is straightforward, I get over the people.txt file line by line, and for every record, I get information about the user. When I have the slice of gurus populated I render the template:

I decided to print the HTML into the stdout because it is way easier to use > other than accepting another parameter to specify the target output.

This series of posts I am writing is a side project in the side project. As I wrote earlier I like to share what and why I do things. I hope to keep having practical experiences to write down.

The high level expectation I set are:

I am sure it gets out clearly from this article the friction between the excitement about having an idea and the effort to make it real, even when it is as simple as a single html page.. I struggle with that all the time, and the laziness usually wins. Will this time be different?! Well, I have a domain that is not a blank page. I think it is a good starting point.

Time matter and have fun! 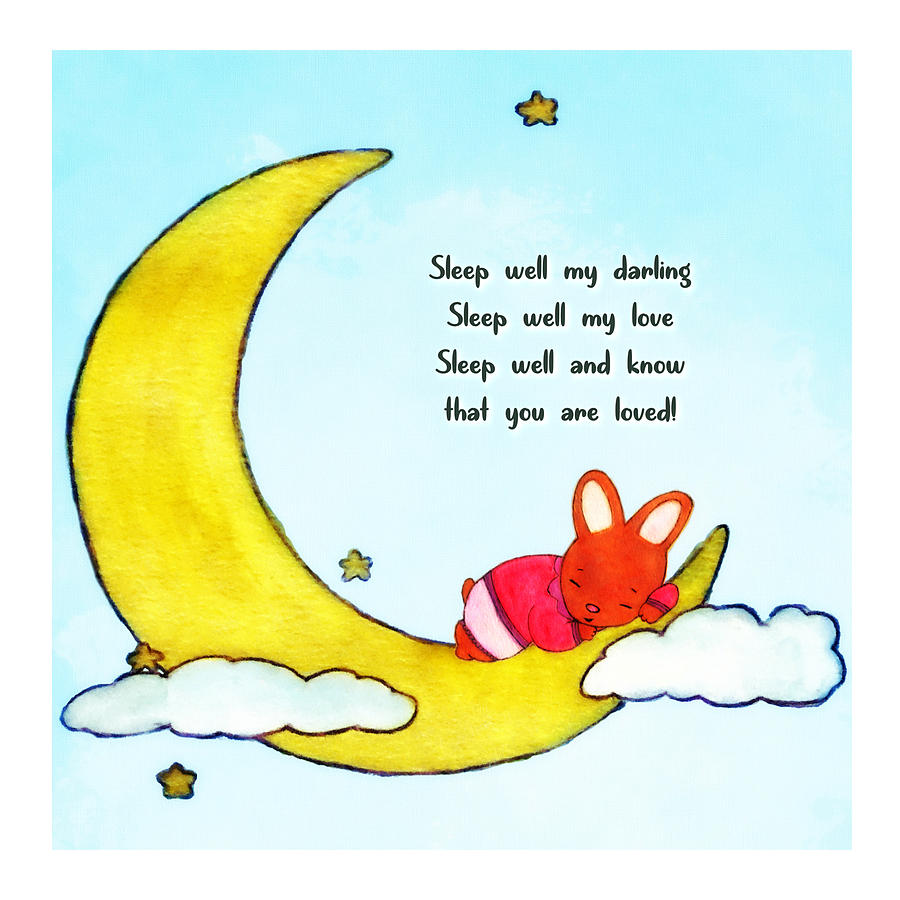