Linuxkit is a new project presented by Docker during the DockerCon 2017. If we look at the description of the project on GitHub:

A secure, portable and lean operating system built for containers

I am feeling already exited. I was an observer of the project when Justin Cormack and the other contributors was working on a private repository. I was invited as part of ci-wg group into the CNCF and I loved this project from the first day.

You can think about linuxkit as a builder for Linux operating system everything based on containers.

It’s a project that can stay behind your continuous integration system to allow us to test on different kernel version and distribution. You can a light kernels with all the services that you need and you can create different outputs runnable on cloud providers as Google Cloud Platform, with Docker or with QEMU.

I am not really confident about Google Cloud Platform but just to move over I am going to do some math with AWS as provider. Let’s suppose that I have the most common continuous integration system, one big box always up an running configured to support all your projects or if you are already good you are running containers to have separated and isolated environment.

Let’s suppose that you Jenkins is running all times on m3.xlarge:

Let’s have a dream. You have a very small server with just a frontend application for your CI and all jobs are running in a separate instance, tiny as a t2.small.

I calculated 1 hour because it’s the minimum that you can pay and I hope that your CI job can run for less than 1 hour. Easy math to calculate the number of builds that you need to run to pay as you was paying before.

If you are running less than 270 builds a months you can save some money too. But you have other benefits:

And these are just the benefit to have a different setup for your continuous delivery.

There is a directory called ./test that contains some linuxkit use case but I am going to explain in practice how linuxkit is tested. Because it uses itself, awesome!

In first you need to download and compile linuxkit:

You can move it in your $PATH with make install.

At the moment the CLI is very simple, the most important commands are build and run. linuxkit is based on YAML file that you can use to describe your kernel, with all applications and all the services that you need. Let’s start with the linuxkit/test/test.yml.

Linuxkit builds everythings inside a container, it means that you don’t need a lot of dependencies it’s very easy to use. It generates different output in this case kernel+initrd, iso-bios, iso-efi, gpc-img depends of the platform that you are interested to use to run your kernel.

I am trying to explain a bit how this YAML works. You can see that there are different primary section: kernel, init, onboot, service and so on.

Pretty much all of them contains the keyword image because as I said before everything is applied on containers, in this example they are store in hub.docker.com/u/mobylinux/.

The based kernel is mobylinux/kernel:4.9.x, I am just reporting what the README.md said:

At this point we can try it. If you are on MacOS as I was you don’t need to install anything one of the runner supported by linuxkit is hyperkit it means that everything is available in your system.

./test contains different test suite but now we will stay focused on ./test/check directory. It contains a set of checks to validate how the kernel went build by LinuxKit. They are the smoke tests that are running on each new pull request created on the repository for example.

As I said everything runs inside a container, if you look into the check directory there is a makefile that build a mobylinux/check image, that image went run in LinuxKit, into the test.yml file:

You can use the Makefile inside the check directory to build a new version of check, you can just use the command make.

When you have the right version of your test we can build the image used by moby:

Part of the output is:

And if you look into the directory you can see that there are all these files into the root. These files can be run from qemu, google cloud platform, hyperkit and so on.

On MacOS with this command LinuxKit is using hyperkit to start a VM, I can not copy paste all the output but you can see the hypervisor logs:

When the VM is ready LinuxKit is starting all the init, onboot, the logs is easy to understand as the test.yml is starting containerd, runc:

The last step is the check that runs the real test suite:

The last log is the output of check-kernel-config.sh files.

If you are on linux you can do the same command but by the default you are going to use qemu an open source machine emulator.

I did some test in my Asus Zenbook with Ubuntu, when you run moby run this is the command executed with qemu:

By default is testing on x86_64 but qemu supports a lot of other archs and devices. You can simulate an arm and a rasperry pi for example. At the moment LinuxKit is not ready to emulate other architecture. But this is the main scope for this project. It’s just a problem of time. It will be able soon!

Detect if the build succeed or failed is not easy as you probably expect. The status inside the VM is not the one that you get in your laptop. At the moment to understand if the code in your PR is good or bad we are parsing the output:

Explain how linuxkit tests itself at the moment is the best way to get how it works. It is just one piece of the puzzle, if you have a look here every pr has a GitHub Status that point to a website that contains logs related that particular build. That part is not managed by linuxkit because it’s only the builder used to create the environment. All the rest is managed by datakit. I will speak about it probably in another blogpost.

runc, docker, containerd, rkt but also Prometheus, InfluxDB, Telegraf a lot of projects supports different architecture and they need to run on different kernels with different configuration and capabilities. They need to run on your laptop, in your IBM server and in a Raspberry Pi.

This project is in an early state but I understand why Docker needs something similar and also, other projects as I said are probably going to get some benefits from a solution like this one. Have it open source it’s very good and I am honored to be part of the amazing group that put this together. I just did some final tests and I tried to understand how it’s designed and how it works. This is the result of my test. I hope that can be helpful to start in the right mindset.

My plan is to create a configuration to test InfluxDB and play a bit with qemu to test it on different architectures and devices. Stay around a blogpost will come!

get "Docker the Fundamentals" by. Drive your boat as a Captain 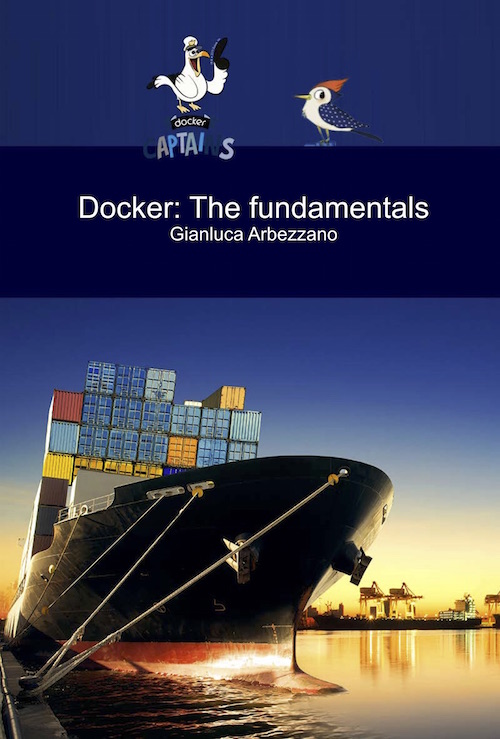 You can get the Chapter 2 of the book "Drive your boat as a Captain" just leave click on the cover and leave your email to receive a free copy.

This chapter is getting started with Docker Engine and the basic concept around registry, pull, push and so on. It's a good way to start from zero with Docker.